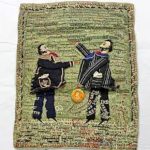 rage and confrontation are ancient behaviors

No doubt the dysfunction from substances creates difficulty in families, especially around the holidays.  Thousands of people feel weird and displaced sad or simply alienated from what the culture advertises as fun and harmony.

For my part, being sober for decades meant that my children  grew up in a house without my alcoholic or drug related drama, and I changed a culture that could have perpetuated. Evidence of deeper problems don’t go away even when someone gets sober.  Alcoholism is a family illness with mental disorders that go beyond the actual substances.

It’s like the story of the farmer whose family survived a tornado inside a bunker only to come out and take a look at devastation, and say, “Ain’t it grand the wind stopped blowing,” while the family looks at the wreckage.

With my family details, nobody called police or went to jail.  Ugly words were said, some physicality occurred and people are still furious four days later. I did my part to try and understand, but can’t fix.  New Years plans are broken. Rage pops up like out of control wak-a-moles.

My third husband and I tried to be good parents. We also live with our community’s ‘AFFLUENZA’ epidemic.  Entitled crap arrogance and attitudes my sons have in their lives affects us all.  Nobody gets out of generational dysfunction unscathed, and much depends upon how people choose to face their difficulties.

I commit to integrity, regardless of how my family feels that I handle problems.  My sons are estranged from each other and they are all that remains of the next generation.  If things get resolved, great.  If not, time marches on.

Truth takes courage, and managing emotional difficulties is flat-out hard to do.  Trying not to escalate drama can make a poor situation better and sometimes it’s all we can do.

As William Stafford used to say, “When all else fails, lower your standards.”

Previous: changes on Christmas Eve Next: time and life