Behaving my Way to New Thinking 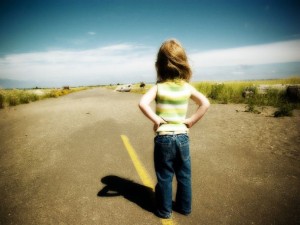 Now I can face it. I didn’t learn how to manage emotions when I was young. My parents worked fulltime, paid bills, drank hard, mostly on weekends. They fed and clothed me, got me to school and still I felt they did not pay attention to my emotional thermometer when I thought it counted. I grew up feeling unseen and misunderstood for what I thought were reasonable feelings at the time. Imagine my shocked and sad emotions when I realized that most people truly were  not thinking about me or what I felt at all. Other people  were doing their day, and generally that did not include how I felt!

Before I realized that I wasn’t the center of the universe,I believed everything I was told, and that I did not know what I was talking about when it came to family drama. I became convinced that my feelings were meaningless, that I overreacted in most situations, as an uptight and high strung person of no consequence.

When I felt something seemed off base in my house, like my parents were drunk, I usually got BIG around it. I got dramatic, in righteousness. My needs were ignored, even though I saw and felt that sloppy, bloody scenes were embarrassing. I screamed at the top of my lungs, slammed doors, and ran away. Nobody noticed.  I honestly thought that outrage would be recognized by adults around me as maturity. I knew I was correct, and my parents would change their drunken ways. My response strategies did not work, and flipped around on me. I became the one who got reprimanded for overreacting, and they mocked me for being righteous. It never worked to be outraged. My parents would only change because they wanted to, not because I wanted them to change. I mistrusted myself for noticing crazy behavior, and my confidence plummeted. I acted out in bigger ways that did not work. I was spinning, as Mom would say, “in a squirrel’s cage.” I didn’t know there was any other way to behave.

I tried  various control methods, sitting on the couch, hoping my parents or brother would notice my honest sorrow, pouting or showing sincere discontent with what was going on. I wanted them to extend themselves, and to pity me, thinking it might change the home scene. I tried guilting my parents too, but that was equally ineffective, and resulted in pissing them off, so their righteous indignation would kick in against me, allowing them to go on doing their thing. I felt insane and isolated, knowing I was right about my crazy family and alone because nobody cared whether I was right or not.

So what if I was right? I was a kid who tried to control the situation. I remember standing in the hallway of my home, realizing my feelings meant nothing to anyone else but me. Who was right or wrong? So what? I couldn’t stop my parents from drinking or blacking out, and my brother wouldn’t do what I wanted him to do. I was so powerless. I had to DO something. I tried to let go of expectations. I felt crazy. Pitiful feelings, pitiful me, useless. But, what good is pity, really? Pity makes me mad when I see others feeling that way, so why did I think it would work for me? Pity never worked.

Pity had to go. Then bye-bye to righteousness, and judgement could not stay either. Day by day, I began to realize that when I let go, I felt better. Psychologists taught me to ‘name the feelings, and locate them in my body.’ Ok, I feel lonely and it’s in my heart. So?

Even after fifty years and everybody dead, still can get charged up by how I used to feel. Thinking and feelings work together, and now I practice taking a look inside myself to what is true, What can I do about my lonely heart? I’ve named and claimed the emotion. That’s a start.  I need to patiently wait, which can be excruciating. I haven’t found anything else to make emotions less powerful except to breathe. Breathe. Sometimes I try other things, like play piano or take a nap. I deal with my emotions on my own.  My neediness for emotional visibility is unrealistic and selfish, all about me. Which brings me to some painful truth about myself. Sometimes I behave like I am on a warpath.

I can’t change my past family scene, the childish way I dealt with emotions, the way I fought in my two previous marriages. But as an adult, I can choose to behave my way into new thinking. I can honestly look at my own behavior. If I self-examine, I’m not so eager to pout or spew onto others.

No one else knows what’s true for me, and that is power, not loneliness. I get insight when I take time to feel, choose to be true to myself. What a ride!  I’m on a confusing emotional highway and know that fear has exits off the road. I didn’t know there were healthier ways to grow up. Better late than never. Hopefully age teaches me some wisdom. I will breathe and try to feel grateful for avoiding any more unnecessary drama.

Previous: More about Listening Next: What did she want to do?