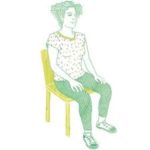 Three months ago I made a commitment to sit with my eyes closed for 20 minutes twice a day, in the morning and at night. The time spend in a quiet state allows thoughts to float in and out, unlocks emotions.  It seems to be a sacred practice because my mind, body and spirit feel much better.  Meditation changes my energy and increases calmness in my days.

Along with meditation, my listening and attention to daily cues from other people increases.  I’m not as interested in justifying my perception as much as before, trying to be right or know more.  Behaving like I’m not the center of all practices humility.  I’m not General Manager of the Universe, my current behavior strives toward letting go of outcomes.  I’m becoming a happier person.

Last night’s dream brought a vivid image of some porcelain bust, maybe sitting Buddha. The figure had a crevice near its lower body holding gobs and gobs of old root. My dream task was to pull out tubers that looked like growth of spider plants, not animal or insect.  I woke up considering how to fill up the statue’s interior.  I knew it wouldn’t be paper, too temporary, maybe sand?  Dirt felt like the right substance because dirt remains in its space.

How to interpret the dream depends upon recent things I’ve been doing, watching First Man in a movie theatre, remembering how Armstrong digs up small shovelfuls of the moon surface.  Secondly, my yard cleaning efforts dealt with rambling spider plant tubers, long crisscrossing vines covering my fences. There was a Buddha sculpture underneath some growth, covered up for at least ten years.

Everyday impressions linger in my subconscious, along with surrender to the control of life’s aspects.  Letting go of brain detritus in waking and in meditation helps move forward toward more peaceful consciousness.   Clear away my past, don’t run, and unnecessary thoughts move away, for real.

What’s real is serenity.  Fear isn’t overwhelming me right now. What a gift.