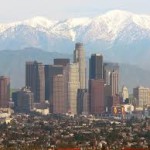 My mother was a snob about Marin County, and didn’t like Los Angeles, because of  population, traffic congestion and the heat.  We had the Bay, which made our lifestyle better, more naturally beautiful than the Los Angeles desert.  I was brainwashed to believe that my Southern California relatives didn’t live in as good a place as we did.

My son moved down to work in Southern California, so I visited him and my cousin, who lived her life at the base of the San Gabriel Mountains.  I spent weeks hiking San Gabriel trails with waterfalls, walked miles down the concrete arroyo (no water) system in Pasadena and Eagle Rock area and saw those cities.  I explored dozens of small towns that blend into metropolitan Los Angeles.  It is indeed a huge area with so much to offer.  Southern California has spectacular qualities.  I’m in love with the people and the energy of Los Angeles.

So much for my mother’s mythology.  Marin commuters wait just as long in cars as in Los Angeles, and there is no metro.  The Bay Area has smaller roads, and huge traffic back ups.  Memory of old Marin does not apply to today’s congestion.  There is nothing great about Northern California traffic and over population.   Los Angeles roads are better prepared for crowds, and road infrastructure moves massive commuter lineups every day down there at about the same speed.

In my opinion, Northern Californians have an elitist attitude about where they live.  Bay Area people used to be friendly, but common courtesy has drastically changed.  In my opinion money runs things more than ever up here.  Fifty years ago, Northern California might have been an easier place to live, and people may have been friendlier, but not these days.  Today’s Marin County is an uptight greying community.

For example, Los Angeles art, music, dance are world class.  LACMA, The BROAD, MOCA, are majorly fascinating museums, with lots of attendance.  San Francisco’s MOMA is a provincial museum, even with recent renovations.  Yerba Buena, DeYoung, and Palace of the Legion of Honor display less than exciting new works, more like rehashing what’s gone before.

I taught art in public schools, and Marin school districts reflect a lack of respect toward the arts.  Local communities are less than enthusiastic, and kids don’t experience an arts community like down there.  Certainly a few sophisticated parents in Northern California find individuals to teach their children how to be creative, but I did not see support as part of the general population.

I visited Los Angeles twenty eight times in eight years, and can only speak from my experiences in commuter lanes and museums while I was there.  People were friendly.  It’s a sophisticated international place.   Southern California lifestyle is much more than Disneyland and surfing.

My son moved away, and my cousin found work in another state, so my family is permanently gone from Los Angeles.  I’ll miss the light on the San Gabriel Mountains and the Pacific Ocean’s calm beaches. I’ll miss the creative spirit of the artists.  I had a chance to see for myself that Southern California is fabulous.

Previous: the coolest Next: writing the truth