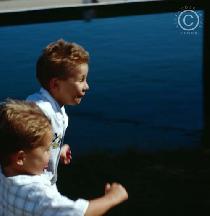 being together is enough

What to do for Brian’s fifth birthday party? I didn’t want to spend a dime on it, because the neighborhood kids cared nothing for bowling or swimming.  They wanted to run around and have a good time.  I decided to make an old-fashioned birthday party, a la the 1960’s, and combine ingenuity with creativity.  First, I enthusiastically suggested to Brian that we put together some fun, surprise activities, and he got excited about the word, “surprise.”  I told him he could invite as many people as he wanted that were his new age, so he invited one little boy from preschool, and four close friends from our neighborhood.  When the day came, I’d prepared a schedule to last no more than two hours. I knew I’d be ready for them to go home by then.

Five little guys arrived around the same time, and went immediately to the backyard to play on the swing set, slide down the rickety slide, and climb the Eucalyptus tree with the bent trunk.  The established rope with a large knot set the tone for adventure.  Lined up behind ‘the leader,’ they went for a swing off the rope, jumping onto the bank of our creek, and scrambled back up for another turn, over and over.  This activity prepared them for the GAMES!

They played around about fifteen minutes, and I sensed the need for something new.  I pulled out a high-backed dining room chair and turned it backward, so a boy could lean over the top of it.  “Drop the Clothespin into the Glass Milk Bottle.”  Each boy precisely dropped clothespins into the bottle, which made a satisfying clunk.  They liked this game so much they went around twice.  The winner  with the most precision got a “cash prize,”  fake large hundred dollar bills I’d picked up at the toy store.

Cake and presents for the party king!   They watched Brian’s face as he opened and interacted with his gifts.  Brian felt like a star because of the group’s attention.  He loved the opening ceremony.  I presented a candlelit cake, as we all sang “Happy Birthday.”   I scooped copious amounts of ice cream onto their plates.   They ate while sitting in the living room staring out the window into the backyard.

Onto the main event!

The garden hose turned into an obstacle course of figure eights, straight lines, looped over and around plastic buckets, the straw broom straight across the finish line.  Like a starting gun, I yelled, “Ready, set, go!” and, in turn, each boy ran the gauntlet as fast as their five-year-old feet would carry them.  Both hands shot high into the air like Rocky Balboa as they crossed the broom, heroes for an instant, and they all received “cash.”

The money meant nothing to them.  Adventure and camaraderie were everything.   Kindergarteners rose to my cheap challenges.  It cost me a trip to the bakery and the toy store for some very cool ‘party bag’ prizes and a wad of faux cash.

Brian tells me, looking back, it was his coolest birthday party ever.  Better than the fancy expensive ones we had for him later as he grew up.  He and his friends still laugh about the urgency of the obstacle course, and being together on that simple, fun day.

One response to “Cheap Party”