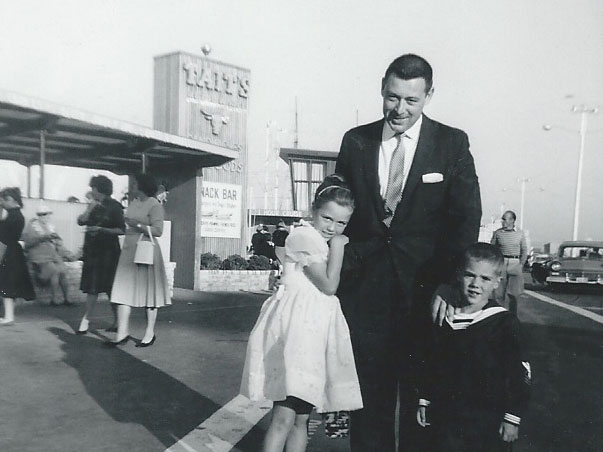 It’s clear I loved my father

I’m emotional because of this horrid anniversary day.  Forty-eight years ago my father put a gun to his head and died.  It’s irreversible.  I’m the last family member to endure this day.  Anyone who copes with suicide understands the devastating rip of losing our love.

My father called to tell me I could pick up his car at the Golden Gate Bridge because he was going to jump.

“No Daddy, NO!” I begged, my last words to my father.  He didn’t jump.  Four days later, he put a rifle to his head and bled to death in a rented room.

Forty- eight year commemoration.  My father’s been dead as long as he lived on the planet.

Calendar blues hit me full on and I almost cried.

I almost cried.  A bit of tear came and went.  We don’t cry in my family.  I don’t remember tears.  I remember alcohol, rage and neglect, standing in our lonely kitchen, staring at the willow.  My mother took a snapshot of my brother and seven year-old me with my father at Fisherman’s Wharf.

Today I’m still the little girl hugging her daddy’s waist for all her might.  Death is real and buries like a leech into skin, drawing blood.  Drama is one thing, castastrophe is another.  Abandoned children left to themselves will not become compassionate until we see how someone who cares about suicide can witness the terror.  There is confusion because we couldn’t stop the bullet.  Love pays a price and in the long run, it’s worth the risk.

Can’t stop a bullet.  Can’t stop an alcoholic.  As Peter Mattheissen said, “When someone close to you dies, you see things very clearly for a long time.