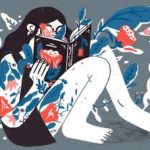 bad news doesn’t go away We learn to cope.

We got the first family bomb in 1966 when the rest of the world was dealing with cultural changes. Word came from Baltimore: my Uncle Bob, 46, turned on the engine of his car and carbon monoxided himself—an alcohol-related suicide.

I only met my father’s little brother once and couldn’t stand the guy, but Christ, no one should kill themselves!  He had accomplishments: was a Veteran, a brilliant Harvard lawyer, and he was also a manipulative person. He was most likely an alcoholic, like his dad and his brother. I found out later he’d been trying to get psychiatric treatment from the Veteran’s Hospital in Topeka, Kansas, and was part of an experimental treatment using LSD to cure alcoholism.  I’m certainly the only person left on the planet who even remembers him because he had no children.

When my grandmother Brown learned about Uncle Bob’s suicide, she couldn’t speak. My father probably didn’t talk about his feelings to anyone, because I don’t think he had any real friends besides booze.  Nobody talked about the ugliness of drinking and the triple generations who coped with its consequences.

This is a story that didn’t just happen to our family, but I grew up believing I was the only one with heavy secrets.  We all need to remember that alcoholism is a disease without a cure.  The only real cure seems to come from a spiritual solution my family members didn’t find.

The spiritual solution is real, and people desperate enough to not want to die from booze will likely turn to some type of consciousness to stop the craving obsession.  I made a spiritual decision not to drink precisely because of the triple suicides that came before me.  Even though I don’t drink anymore, the legacy of suicide runs deep, and becomes a solution unless people talk about the consequences of when a person kills themselves.

We need to talk about suicide and talk about the ugly side of alcoholism.  The talking isn’t to create pity, but to release the secret that shame brings along side such deliberate tragedy.

Previous: who possesses? Next: why fear?