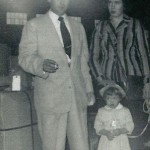 My parents and me arriving in San Francisco

Mental illness is much bigger than most of us.  Hospitals are full of clinically diagnosed people like my best friend, who spent her entire life in them and knows nothing else.

We have undiagnosed mental illnesses that cause those who suffer from it to self-medicate, with substances like drugs and alcohol.  There’s behavioral mental illness, like gambling and overeating.  Many of us suffer from more than one kind.

I’m not trying to figure out the causes of mental illness.  I’ve spent my life trying to understand why I act inappropriately with self-destructive behaviors.  Lately I’ve come to understand that I don’t need to know causes anymore.  I need solutions.

I know a woman who spends her career helping mentally ill people.  She works at a wellness clinic, and people come to her to develop coping skills they can use in their daily lives.  I’m not sure what types of skills she teaches, but what a wonderful thing to do for a career.

Decades have passed since President Reagan kicked the mentally ill out and made them fend for themselves under bridges and eat from garbage cans.  I want that to change.  I want our nation to care for its own.  We need more support for the mentally ill.  We don’t need more jails.

Why aren’t people talking more about mental illness that Americans cope with everyday?

It seems to me that there will be less killing, if we can honestly face our problems, speaking of contageous types of mental illness symptoms that make people grab guns and go for strangers.

Isolation, alienation, lack of emotional support.  Stuff like that.

There is a story told by a Golden Gate Bridge security guard.  His job is to catch the behaviors of people who might jump, like pacing and hesitation in front of the rail, and to stop the jumper.  Sometimes he doesn’t succeed.

One man he was not able to save lived a few blocks from the bridge.  They went to his house after he jumped and died.  He left a note, before walking to jump.  The note said something like, If anyone smiles at me as I’m walking to the bridge, I will not jump.

That story breaks my heart.

My last conversation with my father who suffered from alcoholism and depression was similar.  He called me drunk, to tell me I could pick up his car at the Golden Gate Bridge the next day because he was going to jump.

I begged him, pleaded not to do it.

He didn’t jump on Sunday afternoon.  Instead he put a bullet in his head the following Thursday.  I’ve never been the same.

My experience leads me to reach out for those who suffer from mental illness, and may be one reason I became a teacher who worked with at-risk youth for over twenty years.  I also suffer from demons.  We need to talk honestly about these things.

Mental illness is not weakness or a stigma, but feels like it.  Our weakness, our suffering, can drive some of us to reach out for help.  But not everyone.

I want to help, in honor of the jumper, my father, who don’t have coping skills to deal with mental illness.  Start with the truth.

We need more wellness clinics and people like the woman I mentioned above.  People who truly care.  Bless all of our hearts, truly.

Previous: Why we’re different from our parents Next: Teachers deserve respect