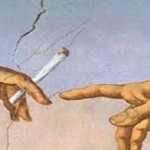 it was more about the weed than friendship

A bunch of girls crawled into the bushes at somebody’s sleepover when I was in junior high school and smoked homegrown marijuana, sitting cross legged in a circle, passing around pungent hand-rolled cigarettes.  Listening to paper crackle, I inhaled without coughing, because I’d been smoking cigarettes since I was nine years old.

It took awhile before I floated outside of my body in a delicious tingle, heard myself talking, but didn’t open my mouth.  We laughed until we peed our pants, and time moved in slow motion marshmallow.  One girl sang Left Bank’s “Had a date with a pretty ballerina…” like the most mature, artistic, sophisticated rock star, way beyond Cher.  Hilarious and hysterical, we crawled out from the bushes completely ripped.  I chased that first zing for years, but never duplicated that first rush. I was afraid I’d get caught, and sure wasn’t going to tell my mom I wanted more weed.

Many people think marijuana is harmless, but I experienced a psychological addiction to smoking it that started on my first day.  I have an addictive personality, so that contributed to my obsession with marijuana.   Adventures came from illegally getting it during the 1960’s and I wanted its numbing effect.  Smoking eventually became a daily habit I relied on for decades.  I told myself I smoked because it was medicine, but my early usage arrested my emotional development and I did not learn to process adolescent emotions in a way that taught me coping skills because I was stoned.

It will be interesting in ten years to see how many teenagers use marijuana as medicine, because it’s legal to recreationally smoke it in California.  If I were a teenager today, who knows what impact it might have had on my usage when there is no more need to sneak around.  My young perceptions changed after getting high the first time, and I became a pothead.  Looking back, I stunted myself because I all I cared about was smoking and getting high.  I forgot about everything else.

2 responses to “my first toke”

Previous: writing the truth Next: go away, shame