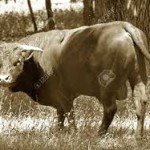 Pancho was the name of all the bulls who lived on the Reed Station ranch in the 1940’s and 1950’s, before our Tiburon subdivision was developed.  I knew Pancho’s successor as a child.  He was mean, didn’t have a nose ring, and lived in the lower corral up the dirt path from our house.  I walked up to the corral, leaned over the fence and watched him stand around chewing dry grass, staring straight ahead.

Pancho moved with slow certainty and his eyes watched me from inside the corral.  He was the size of a spinet piano, testicles swinging from side to side in their loose sack.  He found escape routes out of his corral, and trotted down the dirt path into our backyard, daring us to come outside.  My family stared back at him through the plate glass windows of our livingroom.

My mom called the last rancher to come get him. The tall, quiet rancher lived close by, and drove up in his dusty pickup, prodded and loaded Pancho up on his truckbed.  He backed up the short dirt road and pushed Pancho onto the cow ramp onto the corral’s old wooden weighing platform.  Pancho lumbered back to the corral fence.   A week or two later Pancho escaped again.

One Sunday afternoon, I stood face-to-face with Pancho, loose on our street again, with his ball sack hanging to the ground.  Head down, he came straight toward me, and I backed away step-by-step into a neighbor’s yard.  I ran around the bushes screaming, “HELP!”  No one was around.  I was in my own bullfight, and Pancho didn’t want to kiss me.  I was his red cape and the one-ton machine moved in on me like a hide and seek game I didn’t want to play.

Pancho passed me, couldn’t turn around sharply, so I got behind him like a matador, almost wetting my pants.  Some neighbor must have heard me screaming and called the rancher who came up in the truck and got Pancho, and never spoke a word to me about the chase, as if it was just an everyday thing.

Pancho disappeared within that year.  The rancher reluctantly sold the Reed Station ranch to a developer, and our subdivision dwellers were intruders.  Old cattle ranching dairy days had dried up right before his eyes.   The abandoned corral stood awhile longer, before even bigger development occurred.