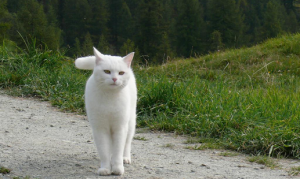 One late summer evening in Craig, Alaska, my second husband and I walked back from the docks to our home on Loop Road.  A perky white kitten scampered along, curious and running beside us as we walked.  “If that cat follows us home, he’s mine, because I love him.”

“He’s lucky to have found us.” Roy, stated, which is how Lucky got his name.

In the beginning, he was not a ‘Come and pet me’ type at all, more ‘I don’t need you, but I’m your friend’ type, on the feral side, not about to sit in my lap.  He wouldn’t purr away in bliss every time I picked him up, showed up on time for meals, was ever-friendly, yet distant.

Lucky was about five months old and his previous owner was a member of the Tlingit tribe on Prince of Wales Island who lived in a trailer at the corner of Loop Road.   I ran into him at the post office the day after Lucky moved in.  I asked if I could have him, and the man said, “Sure, I was going to take him out and shoot him this afternoon.”

Lucky needed neutering, so I put him in a crate and he flew in a float plane from Craig to Ketchikan.  The veterinarian’s assistant picked him up in a limousine, and he spent the night before returning.  Total cost, one hundred and fifty bucks.  When he came home, Lucky took a load on my stepson’s new parka, sending us a pretty clear message to the family.

Lucky fit in with my other two cats, and when I left Craig, he packed up with the others in my Honda Civic and moved to California with me and baby Brian.  He spent over fifteen years in a suburban backyard, coming in for visits.  I tattooed the tips of his ears black, at the Vet’s suggestion, since skin cancer became a problem for him, and Lucky wouldn’t put up with sunscreen every morning of his life.  The tattoos failed, so the ears just looked dirty.

Lucky developed a tumor resembling a strawberry on the right side of his head.  He didn’t complain, and wasn’t around too long after its removal.  He kept on being Lucky, my last link to Alaska.  We buried him in the yard, and I miss him.

Anyone who loves a pet knows what I’m talking about, the metaphor they bring to our loves, our lives.  At their end, they remind us of temporal survival, the great fact we all share on this planet.  My cat was Lucky, and so was I to have known him for so long.

2 responses to “Ode to Lucky”

Previous: Let me go after 75 Next: I’m tired of fixing