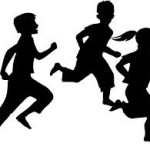 Our whole school practiced Air Raid drills during the Bay of Pigs conflict and the 1962 Cuban Missile Crisis.  We studied the best places for air raid shelters, learning to“duck and cover” under our desks, hugging our knees.  We thought it was great when our teachers presented maps outlining escape routes for the fastest route home.

Not long afterward, school was dismissed and we ran home on November 22, 1963, when Kennedy’s assassination was announced over the school intercom.  Lee Harvey Oswald was arrested, and the world watched him get shot on live TV.  Gluing ourselves to TV for three days, everybody watched parade reruns, a live assassination by Jack Ruby, and Ruby’s death in the jail.  Jackie stoically stood beside Robert Kennedy at her husband’s grave with Caroline by her side, holding four year-old John John in short pants salute his father’s coffin.

What would it be like to lose my father?

Previous: make it a great day Next: knowing kids