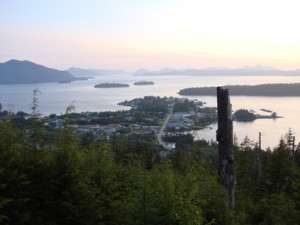 Craig is so beautiful

I didn’t quit my job, just took a leave of absence, in case I hated the fifteen feet of rain that falls annually in Craig, Alaska.  I bought Tim’s new Honda Civic because he was too cheap to give it to me, and parked it at my mother’s for a month while I took a vacation in Baja, Mexico, with a friend in her small RV.

We drove through south and central Mexico, to Guymas, and I had a fling with a charming Argentine-Italian from Cupertino with a sexy voice who was also a teacher.  We sat under dried palm fronds during the day,played in Mulege’s phosphorescent water at night and drank tequilla, which still flattened my ass.  One night we watched the grunion run, incredible army of silver fish swimming to the shore.

After vacation, I drove from Portland to Seattle’s ferry terminal with my Honda packed to about an inch off the ground.  The blue plastic tarpolin on top of the car ripped to shreds on my way up the freeway.  I pulled off to retie it, shaking on the side of the freeway, alone with my two tranquilized cats inside.

I boarded the Columbia, a big ferry, and left Seattle from the harbor with the space needle poking up into the sky. Goodbye city life, I’m fading into the sunset, in God’s hands.  It’s now up to him, her, it, the force, cosmic consciousness, whatever.

In pre-dawn hours the Columbia smoothly rounded a South Eastern corner of the inland passage, Alaska’s Marine Highway.  My sleepy eyes focused on the horizon of Ketchikan’s multi-colored lights, twinkling like a Queen’s jeweled bracelet.  That early August morning, in the water after a rain, fog, and silvery blue-black sky, wilderness wrapped itself around me, smelling of coastal cedars, hemlock, spruce and pine.  I was a chechaquo- a greenhorn, newcomer- preparing to spend my first winter in Alaska. Ketchikan was the last city I saw before sailing west to Prince of Wales Island on the smaller ferry, Aurora.

I unloaded my car off the Colombia as dawn began to glow, and nothing was open at the Ketchikan dock, so I drove five miles down the only main street, Tongass, along the water’s edge, until I reached the historic old boardwalk and creek area.  I peeked through windows slowly as I drove along, and parked on the street.

“My God. I never saw anything like it.” His head hovering over the top of my car, he said, “You’re chechaquo, all right. Let me show you something.”

He motioned to follow him as he turned on his heel, dance-hopped, and jumped toward the creek, waving his arms, laughing like Nathaniel Hawthorne’s Ichabod Crane, looking back at me. We crossed to the top of the bridge, and he pointed toward Ketchikan Creek.

“Ketchikan means stinking fish. In the old days, fish were so thick a man could walk across their backs!”

I looked over and saw solid teeming black mass made of the backs of salmon. Laughing at my huge eyes and half-opened mouth, he said, “I love showing this creek to newcomers.  No one can believe it!”

I boarded my car onto the Aurora ferry. Clouds disappeared, revealing a royal blue sky, and the sun shone in horizontal beams creating long shadows.  We passed abandoned villages like Old Kassan, New Kassan, with their corresponding old and new totem poles still colored richly, and dried up fishing skiffs moored along the rocky shore.

One of the car deck hands invited me to the bridge to introduce me to the captain and watch them navigate. The captain wore silver wire rim glasses and a uniform, looking to me like Mark Twain on a Mississippi River boat, his square, rugged face framed by thinning, gray hair. I stood in back and watched everything. Eventually, the Captain let me steer using the shiny, wooden knobby wheel.

“The Inland Passage is like a great highway of water, and we navigate it using landmarks such as these islands and reefs,” he explained.

Hundreds of tiny islands with only a few trees came and went.  Though I didn’t see them I knew that all through the Southeast Alaska wilderness I was surrounded by bald eagles, ravens, wolves, and black bears, wild rams, and orca whales.

We arrived at Hollis ferry terminal, Prince of Wales Island’s only stop.  The ten foot by twenty foot wooden office stood next to a ramp leading to the only road, and there was no town at Hollis and no pavement, just thirty miles of dirt logging roads running west to Craig.  My car almost bottomed out on the ramp, and it took me over an hour to drive the gravely miles to downtown.

The sun was low when Craig, population nine hundred, came into view, with its mixture of trailers and wooden homes built on a smaller island.  A one-lane bridge connected the island and its fishing marina to another marina. Main Street was a loop. No stop lights, one stop sign in the heart of town.  Children in down vests and jeans walked down the center of the street, stepping aside to stare at my car as I passed by.  Large trawler and seine fishing boats docked; seasonal workers milled around nets.  This was unlike anyplace else on Earth I had ever seen, and it was a dream.

I passed an orange Bronco jeep, and the driver had his window rolled down.  We exchanged eye contact, and he smiled at me.

Previous: It changed but wasn’t wrecked Next: Living through a negative emotion