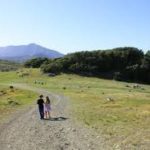 Our adult perception, according to Gaston Bauchelard’s The Poetics of Space comes from childhood.  Dwellings affect creativity, and space can be metaphoric.

Bauchelard puts poetry in a scientific theory.  He sites psychological development from spacial reality.  For example, if we were raised in a stark cell, our ability to hold space differs from somebody who ran through wheat fields and snuck into old barns, or rummaged through old houses with key holes. Shapes and spaces of where we played impacts the brain from those experiences.

My husband’s grandfather was born and raised exactly in the same space one hundred years before my subdivision where I grew up was built.  As a child, there was still lots of open space and hills around my house.  I raised my sons in the same neighborhood as I grew up, but new development occurred, leash laws came into effect, and more congestion made the neighbor a completely different space than it was 130 years ago.

Previous: being vulnerable is scary Next: tunnel space