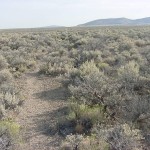 Hastings cutoff was a tragedy

Every Californian knows the Donner Party’s unsuccessful struggle to get over the winter Sierra mountains of 1846 and 1847.  The party believed that taking the Hastings Cutoff would save them three hundred travel miles, but that was not the case. Hastings deceived pioneers. Hastings had never traveled the route, but he made bogus maps that many pioneers tried to follow, and he made money writing his map.  It was not a short cut.  Cannibalism and horror are the Donner party’s story because they believed Hastings.

The Donner and Reed family became trapped by an early, heavy snowfall near Truckee (now Donner Lake), high in the mountains.  Their food supplies disappeared.  They boiled bones and hides over and over again, slowly starving in the snow.

Virginia Elizabeth Reed was twelve years old with her family on that fated wagon train and she wrote about the family traveling the Hastings cutoff.  In mid-December some of those pioneers set out on foot to obtain help for the starving. Virginia was among the group who survived, by walking up and out of those snowy California mountains, during a deep snowstorm that almost killed them, too.   She wrote about her experience in a memoir Across the Plains in the Donner Party.

Rescuers from the other side of the Sierras returned over the mountains to reach the emigrants.  The first relief party did not arrive until the middle of February 1847, almost four months after the wagon train became trapped.  Of the 87 members of the party, 48 survived to reach California, many of them having eaten the dead for survival.

Survivors of the wagon train and their family settled in San Jose, where Virginia met and married John Marion Murphy in 1850. They had nine children together.

I finished reading two letters Virginia wrote a year after her ordeal before she moved to San Jose, while living in Napa, California, and mentioned the horrors the rest of her family endured while she and others went for help.

When I think of my problems, they pale when compared to what poor Virginia went through.  She wasn’t a very literate young girl, but a reader can feel the survivor’s heartache she must have lived with all of her life.

What I love about reading is the mental experience is brain to brain, writer to reader.  Nothing else compares.  I can pick up Virginia’s letters and share her experiences as she recalls that horrible winter of 1846.  I’m glad Virginia wrote about her trauma, and that she lived to bear nine children, early Californians.

We all have our stories, but Virginia’s truth inspires me to tell mine.  She never ate human flesh, but her relatives did, and she told their truth.  Thank God I never had to consider eating the dead.  That’s about as rough as it gets.

I think it’s likely that many California children ponder what they would have done if they had been in that wagon party of 1846.  It’s amazing so many prairie schooners actually made the trip, isn’t it?  Pioneers had stamina that we never needed to muster up in modern times.

I don’t know what I would have done if I had been there.  What would you have done?

One response to “The ultimate deception”

Previous: honest color Next: Why we’re different from our parents