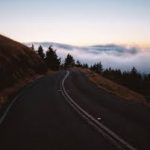 Steve Miller’s Fly Like An Eagle came out when my husband and I were in our early twenties and didn’t know each other.  I love that song, especially the lyric, “Time keeps on slippin’ slippin’ slippin’ into the future.”

Steve Miller started his band in San Francisco and before it became big, they played at my high school homecoming dance. It feels as if I’ve known that song all of my life. My husband said he’d never really listened to the lyrics before today, and heard the word slippin.’

Lyrics are crucial for me, and I thank God for every lyricist who came up with an amazing line.  Some lines have saved my life, and the music carries me through, like medicine.  Sometimes words are ironic, like Tom Waits commenting to Martin Mull on the old ’70’s show, Fernwood, “I’d rather have a bottle in front of me than a frontal lobotomy.”

Johnny Mercer’s Moon River is a forever lullaby.  It’s so beautiful with melody and lyric, Andy Williams knocks it out of the park.  My nuclear family listened and loved it the ease and grace the song carries in its spirit.

Don Williams I believe in Love, was a song I played fifty times a day while going through hell.  Along with an inevitable divorce around the same time, Blondie’s “The Tide Is High but I’m moving on… I’m not the kind of girl who gives up just like that…”  That was a courageous time for me.

Joe Cocker’s Unchain My Heart was on the cassette recorder so much my little boy knows it almost the same as he would a nursery rhyme.  Any version of Stand By Me brings memories of being a single parent.  My son and I drove a curvy road up Mt. Tamalpais to Stinson Beach, singing at the top of our lungs.

My youngest and I had a hilarious conversation driving a two lane highway in Missouri one rainy afternoon just before sunset.  The radio blared Manifred Mann’s Earth Band Blinded By The Light…wrapped up like a [Douche? Deuce?] Revved up like a Deuce in the pale moon light… Bruce Springsteen wrote that song about being excited as a “32Ford Coupe (a deuce coupe).  My son refused to accept any other lyric than wrapped up like a douche and I could not change his mind.  I’m still laughing about our conversation, so many other people have wondered about the words.

John Lennon/ Paul McCartney’s In My Life may be one of the most beautiful lyrics ever written…There are places I remember all my life though some have changed. Some forever, not for better, some are gone, and some remain…” those words rang true for me when I was a young woman.

I’m having fun with songs and lyrics popping into my head, and by no means have a finite list.  I hear a new song and feel as if I’ve always known it.

Brian Wilson’s Lay Down Burden was a song he wrote in honor of his brother, Carl, when he found out about Carl’s cancer. Wilson’s The Last Song “Hold on Tight, Everything’s gonna be alright…don’t be sad, there was a time and place for what we had…”  I played that for my friend who died of cancer within the month.  What prayers to say goodbye.

Thank God for musicians and lyricists, forever in my gratitude, creating time and sharing heart.  Music unlocks a mysterious unchanging part of me.

2 responses to “thinking about lyrics”