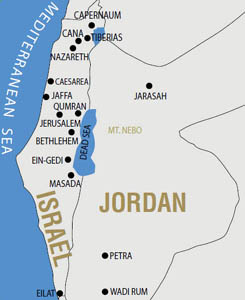 In 1996, I felt a tremendous need to visit Israel and walk the land where Jesus walked, especially around Galilee, and look at what he called a sea.  I found a practical nine-day tour available, ‘ The Historical Jesus Tour.’  Being a teacher allowed me time to travel, and I have been to many places alone, which has its advantages and disadvantages.  For this trip, I knew I wasn’t going to easily find places, since I don’t speak Hebrew or know about necessary permits.   Greek Easter Week coincided with my spring break, so I made plans to take a tour.

A bus blew up in Jerusalem the week before I left, and it was a dangerous time.  My desire rose to a ‘pilgrimage’ level after that. My second child was four years old. I could be leaving him forever.  Was trip was worth dying for?  If I died in Israel, that would be my fate.  I needed to see Jerusalem. I was going, bombs or no bombs.

My husband didn’t question my decision to go. I paid for the trip myself, and didn’t ask permission. He drove me to San Francisco’s International Airport.  My private quest, unlike any before, sent me on my way.

I transferred to Frankfurt, Germany’s airport, and changed planes. What an eye opener. Machine gun packing uniformed soldiers patrolled the waiting area, and removed travelers from the main airport. No one smiled. Tension was everywhere, intense determination to ‘get passengers on the next plane without incident.’  I rode what seemed a mile in a crowded bus to another runway, boarded a smaller plane for Tel Aviv, arrived in the dark, disembarked down a movable staircase, and herded toward customs. No furniture, a long metal table with my open suitcase, two armed guards on either side. A customs agent sat ten feet away from me, as I placed my feet on a line and answered questions, “Why are you here?” “Do you have weapons?” “ How long are you staying?” I remember feeling guilty, why? I don’t know. Angry, suspicious, unfriendly voices through me off balance.  What was I doing?  I do remember thinking, “I want to see Jesus’ Homeland,” and that was the truth.

I am the first person in my family to travel to Israel. Even though my grandfather was dead, I knew he would have wanted me to go. I told myself I wasn’t alone, even though it physically felt like it. I waited in the dark in front of the airport, relying on a cab driver who spoke only Hebrew to drive me to my hotel on the edge of the Mediterranean Sea. City lights sparkled in the distance. I gratefully thanked him with pantomime and payment when he dropped me off, went inside the lobby, registered and went to bed.

Daylight found me on a tour with fifteen Filipino travelers also interested in history. There was the Mediterranean Blue Sea, and Tel Aviv, very modern, which surprised me. My fantasy was the entire country would be ancient, which it is. But living people were doing their days, too, contrasting ancient with new, a simultaneous past and present.

Our knowledgeable guide and a safe driver took us to Bethlehem, and we also explored many Roman historical places, like Caesarea. We visited Canaan and spent the night on a Kibbutz. There was the trip to Haifa and the Carmelite monestary, Mt. Carmel, Tiberius, Nazareth, Capernaum. We walked the hillside overlooking the Galilee, or Lake Tiberius, where Jesus supposedly gave his Sermon and the Beatitudes, Golan Heights, Jericho, Dead Sea, Masada, the Dome of the Rock, Wailing Wall, Old Jerusalem.

I learned that religious landmarks aren’t what we imagine. Four hundred years after Jesus’ death, Roman Emperor Constantine’s mother, Helen, traveled to Israel and marked what she thought would be holy locations, and Christians still claim those as the places, but it’s impossible to really know. For example, whether or not Jesus’ Bethlehem manger was once made of wood, today it’s a stone manger inside a church.  Also, the sacred Church of the Holy Sepulcher, in old Jerusalem, is the holy roof over the hill called Golgotha, where Christ was said to be crucified.  In the exact same building, there is a tomb, with a marble sarcophagus inside, protected by Greek Orthodox priests, that they say is for Jesus.  Not too far away from there, the supposed ‘Room of the Last Supper’ and ‘David’s Tomb’ are in the same building. I must say, it’s convenient for the tourist on a pilgrimage.

Over nine civilizations died and survived in this region.  Jesus was part of an ancient landscape so long ago. We’re lucky that we have any information, even though much is lore, it’s consecrated there, regardless of all the changes. For me, Jesus became a ‘state of mind,’ and his teaching resonates even more within me, as I’m sure it did with previous generations of my family, even though they didn’t get to go.

I returned home on schedule and went back to work, with vivid memories of Israel and a deeper connection to history. My spiritual teacher lived and breathed in a real place. My pilgrimage was worth it.

One response to “Visiting Israel during Greek Easter Week”

Previous: Obsessions: emotion Next: The truth of knowing and feeling at the same time