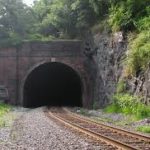 bygone tunnels had tons of stories

My children like to hear about stories of when and where I grew up.  I remember bygone landscapes and know it’s up to me to tell the tales.

There were two long tunnels near the house. North tunnel was straight and pitch black in its middle, so dark we couldn’t see our hands in front of our faces because it extended a quarter of a mile from my neighborhood north of Tiburon to Corte Madera.  The south tunnel was shorter, but it was built the same way.

My father predicted we’d explore inner reaches of both dark tunnels, so he taught my brother and me how to hide inside structured two-by-four side tunnel foundations, in case of emergency.  He taught me to lean sideways with my back up against the beams, scrunch and push hard, so my legs fit tightly against the other beam and I wouldn’t get vacuumed up when a long train came through.

My daddy was right, we played in those tunnels for years and years without a train in sight.  I felt comfortable knowing how to avoid being sucked into a passing train.

Developers blew both tunnels closed, and people bought the railroad tracks and property at the mouths of the tunnels.  Anyone who didn’t live near them during the old days wouldn’t even though they existed.

Previous: travel without Next: act locally