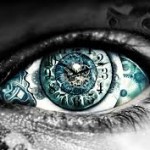 what do we know about time?

Many people believe time is a theory of fourth dimension, like the essence of the hands on a clock.  Part of the scientist Newton’s theory was that time was as a flow, a key dimensional role in math and physics, as well as behavior.  Time measures change.  We live in time.  What happens when we die?

Consider measuring change through behaviors, ‘before’ and ‘after.’  There is time before I was born, and time continues after I’m departed from Earth.  Like my friend Helen, who died two weeks ago.   Time ‘flies,’ since two weeks passed so quickly.

As mammals, our behavioral habits exist in time, and obviously, consequences lead to future consequences.  We also think about time in three parts, past, present, and future.  Scientific efforts like Pavlov’s stimulus experiments measure that dogs react, but we don’t know their sense of time, if they operate in the past and future, but we can observe habitual responses to stimuli.  A dog experiences habit, remembers and responds, we observe this on instruments like brain scans.  How can humans comprehend what a dog experiences, except by watching?  I do not have any answers.

Go to metaphor, a poetic way for me to connect time.

Henry David Thoreau said, “Time is a stream I go fishing in.”  The water metaphor works for time, ice and steam as well as liquid are stages of our past present and future, habits or not.

When we die, what happens to time?  Obviously this is an eternal question.  Perhaps the fourth dimension is no longer a factor after life as we know it ends.

I can get so caught up in past and future that I forget the present is where everything occurs.  When my ‘time’ comes to an end on Earth is not necessarily up to me, unless I habitually destroy myself, like smoking or drinking and driving, or some other disaster happens.

Whether or not present time is ‘precious’ seems unimportant.  Does that mean time is a personal dimension?  Respect a flow, for our behavior, and our sense of whatever metaphor we choose to explain the unexplainable.

In my opinion, death is not part of the fourth dimension, it looks like time just stops.  I can fill in any theory I want for what happens later, but I don’t really know.

My youngest son was six years old when he attended a ‘viewing’ of his distant uncle.  He looked at Uncle Mario in the casket and said, “He looks like a hermit crab who went to find a new home.”

That seems an accurate observation.  New home, indeed, within the fourth dimension of time and place, not so sure.