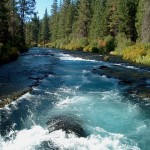 I woke up around dawn to the sound of a brilliant yellow bird with a red head banging into our windows.  It might be the bird thinks its reflection is really a mate or an enemy.

I wanted to stop the bird from smashing into his own reflection, so I closed the curtains, maybe that would help. He continues out there chirping and focused on his own destruction.

I frequently act like that beautiful bird. I’m absolutely caught up in trying to protect an illusion, to the extent of my own injury.  I know I’m right and by God, I’m going to do what I have to in order for the universe to cooperate with my demands.

What a lesson.  The bird spends his whole day trying to bash his head against our window, in spite of others trying to prevent the inevitable injury.

Why? Is stubbornness so important as to die?

I remember as a college student I whitewater rafted on Oregon’s McKenzie River and spotted a green tackle box under a small set of rapids.  I told myself I needed that tacklebox, and almost drowned trying to stop my boat in strong overlapping whitewater, holding onto rocks, in order to go under and snag the box.  I went under the rapid water multiple times and got caught up in its river power, buried in stubborn determination to get that box no matter what.  It was dangerous, and I felt vulnerable, but did it anyway.

I did rescue the box, and it wasn’t such a great treasure, but had been a mission for me that became an obsession. The box sits for forty years in my garage, filled with crap I never use.

So much for getting my own way.