I traveled to Havana, Cuba ten years ago as one of several chaperones for Tamalpais High School’s Art and Music students.  The trip gave students a chance to learn Cuban music.  We went to university ballet and folk dancing events, and visited art schools for painting and drawing.  Students had a great itinerary of activities during the nine day trip.

I had free time, and walked around the Havana Vedado district to La Coppelia’s lush covered park and flying saucer-shaped building between Calles 23 and 21.

La Coppelia is a state-run pavillion of ice cream in the middle of the park. 1,000 people at a time eat ice cream in that 1960’s structure, designed by Fidel Castro to compete with American ice cream.

I have never eaten such fantastic ice cream.

Patrons spend their free time waiting for hours in very long lines on all four sides of the building.  When it’s our turn, we enter a jungle pathway and ascend a staircase to common tables and order unforgettable ice cream that comes in cold metal trays with tiny metal spoons.

For me, the waiting was as fun as eating the ice cream.  I spent hours practicing my Spanish with doctors, teachers, patients and parents.

A mother, father and a boy stood in line with me.  They came by bus from the countryside to Havana Hospital because the boy’s face needed surgery.  We chatted pleasantly in line for hours and found ourselves sharing the same table.

The waitress asked, “Chocolate or vanilla? Cake or no cake?”  I said yes both to chocolate and vanilla.  The mother ordered cake with her ice cream, as did her husband and son.  Our orders arrived.  The mother really surprised me.

She picked up her dish, took her spoon, split half of the cake and placed her cake onto my dish.

I have never seen an American make a gesture that generous to a total stranger.

She thought nothing of sharing her cake with me.  She smiled and ate with her family.

I’m still touched by her kindness and spirit.  That moment describes the Cuban people, and I will never forget the beauty of that woman’s face. 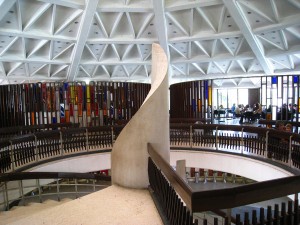 Previous: I’m trying to be kind Next: memory and time