It’s not just him 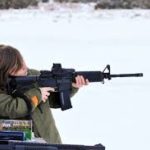 Americans seem to forget we live and operate with violent behaviors every day.  The 17 murdered people in Parkland, Florida, last Tuesday is our most recent tragedy.  No words can truly depict horrendous gun shootings.  Our nightmare brings more devastating lifelong fear and grief in untold ways.  Sad and true, violence is interwoven and we need to address mental illness as part of America’s problem.

Our loved ones are gone, we can’t bring back dead children, teachers, fathers, mothers, sons, daughters, victims of consequences of what happens when a kid disassociates with himself and his society, like our recent shooter.  And he is ‘ours,’ because he lived and functioned up to the age of 19 in USA.  He’s forever a ghost prisoner in his own mind and in our prisons, lost forever among demons and darkness where he lives.  I feel sorry for his pain, as well as the pain he inflicted because he was in pain.  I don’t defend the shooter.

A mentally sick kid knows they are sick, it’s no secret to them.  Violent behavior stems from a variety of reasons, the student often fears themselves and their failures.  Rage becomes their lens.  Punishing with shunning expulsion can fuel the fire, as with our recent Tuesday shooter, who would have greatly benefitted from support of psychological therapy intervention earlier in his life in the school system.  clearly revenge and obsession grows, it wasn’t like his rage was hiding. He socialized on media and people ran away from his intense threats.  He floundered until it was too late.

Expelling a student who has felt alienated his whole live isn’t the solution.  Imprisoning after a  deed costs way more money than any type of mental health treatment.  To avoid helping mental illness we have to face it.

The recent 19 year old, however, was an adopted child of a mother who recently died.  He had nowhere to live, and was also expelled for being a ‘bad kid who caused problems for others.’  I can just hear school administration saying the kid must have been a real piece of work, who wants to deal with him?  Cut him loose, expel him.

This 19 year old murdering perpetrator will not be our last in America.  We can see the individual for who they are, going beyond a ‘cry for help’ and all their screaming, screaming.  We can utilize strategies for our mentally ill, and see them as humans with troubles.  If we don’t reach out before it’s too late, the person blows themselves or everyone away.

We have tragedies in schools, and in America.  All of us are part of the systemic problem, in almost every aspect of our lives.  What we promote with technology and dismissing illnesses doesn’t solve mental illness and violence.  It’s not just one kid, it’s our nation.  Effective methods to deal with sick people using proven techniques are available to challenge the status quo.

I taught at a continuation high school for almost two decades.  We had our share of violent students in the juvenile system.  I remember one kid went after another with a knife in science class, and the calm teacher broke up what could have been bloody, one single student stabbing.  Too much mental illness, too much suicide and homicide.

My principal’s school philosophy was psychological and effective for many struggling individuals.  Start early, accent positive behavior, focus on each success, because success is addictive.  He subscribed to “Reality Therapy,” a psychological model that worked to help ‘at risk’ high school youth through positive behavioral changes.

Small public high schools are effective, because students and teachers form personal relationships.  Everyone knows who each other are, and they are part of a community.  The staff and students interacted in multiple classes throughout the day.  Change can start with a familiar, supportive school system.  Students in small groups behave more comfortably with people they know.

In my school’s case, teachers and counselors knew their students, and recognized mental illness in ones who suffered from it in various degrees.  The community responded to behaviors immediately and interacted with students, to minimize disassociation.  Coming from the old ‘whole child’ model, the student with serious problems deserved focus, not fending for themselves because they have few coping tools.

Our staff’s philosophy was based on a realistic model of success: reward effort, students earned credit for specific work and projects, like paychecks.  The credit counted directly on their transcript toward high school graduation. The student got immediate concrete success.   If they began the first school day sitting around doing nothing, twittling their thumbs, they earned nothing, because they did nothing.

It took a day or two, until kid realized HE/SHE was responsible for personal success or personal failure.  When the student made an effort, the staff recognized change, rewarding the student with positive feedback and credit. We saw good and the student moved forward.  The ‘Reality Therapy’ school model works.

Take another adult example, like my father, who suffered from depression caused by alcoholism.   He put a gun to his own head at the age of 48.  No one predicted that my dad would kill himself.  Our family focused on his drinking and what a ‘problem’ he created for our family, defining him to his disease.  My father chose violence to himself, and lives were permanently altered.

My father certainly said to himself, “I’m a piece of work, I shouldn’t be on Earth,” so he went with suicide, and his isolated decision forever changed my life.  The chain reaction from violence by guns is large, and is not simply an isolated person with problems.

I suggest a paradigm shift in society, with compassion in the way we operate our schools.  Teachers and counselors can be empowered to help to avoid further glorification of violence, but we need good training and support from local communities, which means supporting the helpers, too.

2 responses to “It’s not just him”

Previous: people of character Next: painting with encaustics