listening to my heart 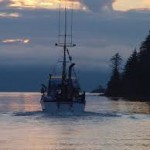 my godson fishes in Alaska

During the four years I lived on Prince of Wales Island, Alaska, my dearest friend asked me to be her son’s godmother.  I felt such honor to be asked.  He was a month younger than my infant son.  If I had stayed on the island, the boys would have grown up to be like brothers.  But I left POW as a single mother, remarried, and raised both of my sons in the same California neighborhood where I grew up.

Our grown sons are 32 years old.  I mailed my godson birthday, Christmas and Easter cards for his entire life.  32 marks the same age I was when my son was born.  My godson has a two year-old daughter of his own.

For a few years I’ve felt like my friend and my godson were fading out of my life from lack of correspondence.  No return messages type of thing.  Two weeks ago, my heart told me to write them each farewell letters.

Anyone who has lost people with tragic deaths as I have experienced will understand what I mean about needing to close friendships.  Not saying a formal goodbye is the worst feeling in the world, super painful.  I did not want my friend, my godson and I to fade away, but I needed closure.

I sent him a card with a photograph of a sunset, and wished him a happy 32, mentioning that he is the same age as his mother and I were when he was born.  I sent him love and blessings for the rest of his life, in case we don’t hear from each other anymore.

I photocopied a picture of my friend and my own son in Alaska, taken four years ago, when he went up for a visit.  I bid her farewell and thanked her for a lifetime friendship, closing our lives together.

My friend called me the same day she received my letter, shocked that I wrote such a thing.

“Don’t you want to be friends anymore?” she asked me.

“Of course I do, but it’s been so long since I heard from you, I thought it was over.”  I replied.

She didn’t want to end our friendship, and thanked me for waking her up about what being a friend means.  We talked for over an hour about why she hadn’t been in contact.  It wasn’t about me at all.  Her life was super complicated.  I was so happy not to lose her.

My heart knew I had to write those letters.  I needed more from my friendship than receiving nothing.

My godson texted me the most beautiful note the next day, thanking me for remembering all of his birthdays and holidays until his 32nd year.  He reflected upon time.  He’s a father and loves his daughter as much as his mother and I loved our babies when they were small.  Our lives have gone full circle.

I listened to my heart and wrote those notes because I needed to reach out.  What a payoff.  I have two people back in my life because I let them know I cherish my friendships enough to let them go.

One response to “listening to my heart”