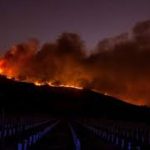 nightmare on the horizon

Yes, the Coffey Park fire, known as the Tubbs Fire continues burning after a week, and is half-way contained. My brother-in–law and his wife survived the fire because a neighbor called, giving them ten minutes.  Evacuating their neighborhood subdivision took over an hour, and another hour to get to a two-lane road headed west. There were so many cars and only one road. Trees were smashing around them, and blocking other exits.   There was no emergency infrastructure.  They spent the rest of the night in a parking lot miles away, glad to be alive.

“It’s purification,” he told me on the phone two days ago, the first time we talked.  It’s all gone, and he’s well aware his life is forever changed.  Starting over as a senior…..

I was impressed by his positive attitude, grateful to his neighbor for calling to tell him to evacuate.  If he hadn’t called, it would have been too late to leave.  Thank you for caring enough to save lives!

Having been evacuated before, I understand ‘get out,’ and leaving stuff, when it comes to life and death.  No question, lives matter more.  Fear mixes with smoke.  There nothing to describe racing away from home with the possibility your home will never be there again.  What’s in the unknown?

My husband and I didn’t lose everything in the Butte Fire two years ago.  However, it doesn’t take long to forget how lucky we are to survive a horrific fire like that.  A second fire in West Point occurred three days ago, burning 250 acres in the downtown area. Four homes were lost.  CALFIRE notified with a ‘robocall,’ if you signed up for notification.  Too bad for you if you didn’t sign up.  It happened really fast.  The firefighters won that time.

If the wind hadn’t changed direction, we’d be toast for sure.  We were spared. So lucky, again. Deja Vu.

What can we do to help?  A friend of mine and her friend took positive action, and started californiafirehelp.com.  Artists and designers are donating items and 100% of the proceeds got to help California fire victims.

Rebuilding efforts will take years, so thousands of people are reconsidering their life priorities.  Do they want to return to a neighborhood after fire’s toxic waste is removed?  Cleanup’s a major job.  Meanwhile changes won’t happen overnight.  Fire is everlasting.

My home stands today, my brother in-laws does not.  We will never know why.  Random winds change so many lives.  California still burns, and we learn to cope.