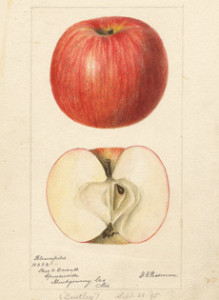 I stood in my kitchen this afternoon, cut up an apple to eat, and a couple of potatoes for the oven.  I accidentally picked up a piece of raw potato and took a bite, thinking it was an apple, but clearly it wasn’t.  An apple stands alone.

So what is it about an apple?  They are both alive.  One grows on a tree, another in the ground.  With a texture similar to a raw potato, white, filled with water, it ends there. Tart, sweet, and crisp, an apple is the essence of GOD.  After all, an apple a day keeps the doctor away.  A potato can not make that claim.

This is an ode to the apple, but hey, people have written about worse things.  I will always love manzanas, and have fantastic memories of a succulent apple at a perfect time.  I could expand, but don’t feel like writing an apple memoir right now.

Indeed, I had bitten into a raw potato.  My mouth said, “That is NOT it.”  I was sort of shocked, because we all know that munching does not cut it with a raw potato.  If you have ever tried eating a raw potato, you know exactly what I mean.  A potato needs an oven and then something’s going on, because it changes for the better BIGTIME.

An apple doesn’t need to change.  It surely does change when fried, baked or pureed, but a good apple remains true.  We’ve all had a lousy apple, perhaps the Gala, or what used to be great, the Winesap, not worth eating mush.  That is a disappointing experience, don’t you agree?  Same with both the red and the yellow Golden Delicious.  Even a Granny Smith can sometimes succeed raw with a chaser like peanut butter, or baked in a pie, adding something like sugar, vanilla and a crust to even out its tartness.

Welcome to the Fuji, a modern supermarketer’s dream, with almost everything going on, crisp and moist.  But don’t you really think a Fuji is a blah eating experience?  Like a hot house tomato, there seems to be a vacuum, with a missing fundamental essence I can’t explain.

From what I know, apple types are regional, like a Gravenstein.  Many Northern Californians love that Sebastopol mascot.  My friend bought a small farm with 163 Gravenstein trees, and she sells to Trader Joe’s to make applesauce, which is fantastic.

For me, hands down, the Pink Lady is a great apple.  Although it can look a little bruised, the Pink Lady definitely depends on how fresh it is.  But eat a fresh one, and Heaven comes to Earth.  At least that’s how I feel.

genetically from a hard black seed

I penetrate into moist earth

I strengthen on a branch into blue sky

I might deliver plump fruit or may sprinkle away

I could well become a small tasty tart

served as a triangle on a clear glass plate

beside a silver fork

One response to “love the apple”

Previous: Spring in Marin is so beautiful Next: burn the stack