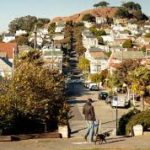 I walked down a Bernal Heights neighborhood street in San Francisco, and two six year-old boys had their faces inches away from their driveway, scratching sky blue and yellow chalk blobs into its surface, while parents stood nearby, talking about where to put green cans on the street.

I love it when children dive into their work.  I love their focus and commitment to a medium, chalk or whatever, getting messy and filling space.  I envy their absorption.

Thank God for playing around without having to be great at something.  It’s been awhile since I’ve seen children simply messing around, having a blast, oblivious to hovering parents, which seems the state of parents raising children in the United States of America.

My parents weren’t watching me in the front of my house when I was six, chalking my heart out on the sidewalk.  I also stained my fingers with geranium petals as I rubbed them into concrete, happier than I can put into words.  My life, my memory.

When my oldest was a year old, I called Novato’s Target store because I heard someone had stolen a child out of the cart in that store, took the baby into the bathroom and shaved its head before kidnapping it and walking out the front electric doors. Target denied the story, of course, but I thought I’d ask and find out for myself.

My boys were lucky enough to live in the same neighborhood I grew up in, and Thank God we never had abductions.  Of course, as parents, my friends and I had the inevitable public panic moments, when our children weren’t instantly where we thought they were, and I always assumed they were dead.  It’s a tragically helpless feeling to go to death all the time, but that’s where I go.  I am mercifully grateful my children survived into adulthood.

My youngest got off the wrong bus stop on his first day of kindergarten.  I waited for him to get off where he was supposed to, and the bus driver looked like, “Duh” when I asked her where was my little boy.  She told me she let him off on the town’s main boulevard because she believed him when my son told her that was his street, which it wasn’t.

Strangling with fear, I drove like a bat out of hell over to the supposed stop, and he wasn’t there.  More insane with every breath, I drove back toward my house, hoping he’d maybe walked home, at the age of five.  It turns out, some other mother I didn’t know saw him standing on the boulevard, and she drove my boy home, dropping him off in front of our house.  Lucky, very lucky.

Combined memories of innocence and chalk, freedom and abduction, mixing with creativity, loss and love.  Life does its thing and we are part of the experience of what comes our way.

Previous: ego-ick Next: choose a caliber