no two memories are alike 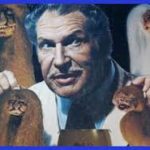 Vincent Price is the scariest of them all

Today my first cousin and I had lunch during her work day.  We can go years without seeing each other, so it’s special when we do get a chance to visit.

She is my mother’s sister’s oldest daughter, “the closest person to having a sister you’ll ever get,” my mother used to say, which is true.  I’m one year older, and our memories align closser than memories she has with her younger siblings.

We sat in a cafeteria and reminisced about early teen age days at the drive-in movie in San Rafael.  She remembers her scariest night and my scariest of my life,  a triple bill of Vincent Price in “The Fall of the House of Usher, The Pit and the Pendulum” and one other terrifying film about a guy stuck inside a room, unable to escape his death.  I was terrified and miserable after watching those three in a row, and forgot she’d been in the car with me the whole time.  She saw them too, scared beyond tears.  I have no memory of her being there that night, but she was.

We talked about a couple of other memories that we share, too.  What’s particular about sharing early childhood memories with her is that she’s the only living person who has the same family ones, since my brother died so long ago.  What a gift to share memories that far back.

Memories seem so real, yet my point of view can completely alter an experience.  I can cut people out like they weren’t even there, which is what happened with the Price three flick night.  All these years I thought I went to those films with a bunch of friends, but she was there along with my friends, absorbing the same terror.  Neither of us do horror, so it was unforgettable for both of us.

I’m grateful we had the chance to talk about that today, and rekindle something that seems simple to others.  For me was a treasure to still have her around.

Previous: hardware store for bread Next: what is a shaman?