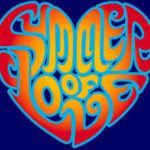 Come on People, Love one another right now

It’s the fiftieth anniversary of San Francisco’s Summer of Love. My friend and I were there, wore our beads and long hair, before starting freshman year of high school.  We smoked marijuana and played on Golden Gate Park’s kiddy merry-go-round while rock and roll music played on the greens, and positive energy flowed like a river.

Meanwhile, politics at Berkeley opposed the Vietnam War, with multiple demonstrations.  San Francisco had a different focus, pulsing with fun and party atmosphere.  Life crested like a wave on the edge of a new beach.  We wanted good times to go on and on and on.  We craved natural lifestyles, and organic food.  I thought San Francisco was the center of the universe during a spiral of profound uplift.

Television broadcasted an event during a the end of the summer.  “The Death of the Hippy” was an elegy decrying the end of values professed in the summer of hope and change.  Society changed.  The elegy predicted the future moving in a different direction.

Fifty years later, I’m a senior citizen with a memory of being a girl during those times.  People from have aged, and many people are gone. Summer of Love memories fused with other decades.  Assassinations of Robert Kennedy and Reverend Martin Luther King shifted innocence in an ugly direction.

I lived during a special time and place.  My generation was further influenced from growing exposure of television broadcasting.  Love values became less ‘realistic’ because my generation saw that simple love couldn’t fix everything.

Love does make things better.  It’s a better alternative than less positive attitudes.  Credos of “Make Love not War” made a difference.  I didn’t understand serious consequences resulting from Vietnam.  I lost friends who fought in Vietnam, which lasted another eight years and became a horrible endeavor my generation was forced to endure.

Many of us gullible enough to believe love was the main answer are still alive.  Despite wars, impeachments and threats of disaster, it’s still up to us to keep love going, pass it on for the future.  Making love instead of war is still a great idea.

Previous: What feeling ugly does Next: Love Anniversary