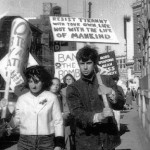 trying to change the world

I thought Beatniks of the 1950’s and 1960’s were the most creative nonconformists in the world.  Hanging out in coffee shops with friends, sharing political and artistic efforts that changed the world was important in New York’s Greenwich village.  As a kid, San Francisco’s North Beach expanded my desire to create beauty, and tell the truth.  I was a fourteen year-old hippie and I sang folk music during the “Summer of Love.”  It was the year before my father committed suicide.

Pete Seeger was a brave role model, and I memorized Turn Turn Turn and the time for every purpose under Heaven.  My friend’s brother in-law Earl was the first Marine I knew who was killed in Vietnam, leaving his widowed young wife and two baby girls.  Singing Dylan’s Blowing in the Wind reinforced my belief that I did not want any more people to die.

Courageous ideas were changing America.  African Americans were marching for equality.  My Episcopal minister in Mill Valley divided members of his congregation because he marched in Selma, Alabama.

In college, I protested against Plutonium and the proliferation of nuclear weapons.  I do not want more bombs dropped on this globe.

I believe the adage, “Think Globally, and Act Locally.”  I want artists to continue believing in causes, organizing fundraisers to make the world better.  I taught in public schools because I love young people, and I want to empower them.

We can inspire each other. We have a history of music inspiring hope.  Listening to the old folksongs continues caring.