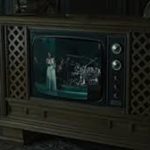 I made sure no friends were around when my father put on a green jumpsuit and locked himself up in his bedroom for hours with cheap beer, singing Bing Crosby Irish songs over and over.  If he got religious with Ernie Ford gospels, his swollen puffy fingers scratched records as he fumbled for a replay.  I loved his voice so much.  But when he was out of it like that, I stood with my forehead pressed against the closed bedroom door.

My sober father could be the best, and my favorite memory is when he took me on a special date to the Circle Star Theatre in San Carlos, California to see the Righteous Brothers perform in the round.  We sat close up for my first concert experience.  “You’ve lost that lovin’ feeling,” and“Unchained Melody” still feel like soul songs.  I was fourteen, and wore a kelly green mini-skirt suit with dark pump shoes. I set my hair in brush curlers, put on makeup, suntan pantyhose, wanting to be beautiful.  I felt like a movie star when my clean shaven, handsome father in his dark suit and tie, gave me his arm when we walked onto the lobby’s red carpet.

At the same time my father struggled with his deadly disease, my mother got the best job of her life at a local weekly newspaper, handling classified ads on the phone and at the front desk, doing payroll, proofreading and working as part of a team.   She was so happy, looking forward to going to work.  My grandma still lived with us, reading in her makeshift bedroom, waving at my brother and me after school, smiling behind her thick lens glasses.  She didn’t know what was going on.   My dad wore the green jumpsuit uniform as his binges became more frequent.

“Should I tell your father to leave and only visit us when he’s sober?”  My mother asked me.  How should I know what she should do? By then, I was fifteen.   She started attending The Marin Institute for Alcoholism meetings, learning about our family’s disease.  Things changed around the house because my mother started setting boundaries.  I hated it when both parents drank, but by then I was drinking too, only they didn’t know.  I wasn’t going to confess.

My mother shot jelly glasses of bourbon on Friday nights, leaning into the sink, which didn’t look fun.  My dad’s boss at MetroMedia gave him one last chance.

My mom did ask my father to move out, inviting him home when he was sober.  She didn’t tell me if my answer made any difference to her, so I felt guilty because he was gone.  He rented a boarding house room in San Rafael, got fired again, lost his license because he drove drunk, what the cops called DWI back then.  It was the third time in two years.  He couldn’t work without a car.

Grandma Brown moved out of our house to a sadly divided Victorian in San Rafael, one-room hovel, peeling white paint covering the windows. By then I was driving and picked her up for the holidays.

My sober father came home a couple of times to spend the night.  I stayed up late with him watching old movies, cherishing memories of hanging out and watching TV.

“I couldn’t take it anymore. I didn’t put your father out when he was down.  He had a job and a place to live when I asked him to leave.” My mom looked older than forty-one, drinking straight shots of Ten High Bourbon, smoking two packs a day.

Those memories need to be aired.  They are the type of situations people need to read.  They are the truth and might even be happening to them.  I am not judging my past, just letting ghosts fly away with words about olden times.

Previous: big sin Next: calming down