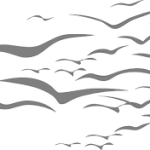 William Butler Yeats wrote The Second Coming in 1919 in the aftermath of World War I .

Turning and turning in the widening gyre

The falcon cannot hear the falconer;

Mere anarchy is loosed upon the world,

The blood-dimmed tide is loosed, and everywhere

The ceremony of innocence is drowned;

The best lack all conviction, while the worst

Are full of passionate intensity.

That darkness drops again but now I know

That twenty centuries of stonysleep

Were vexed to nightmare by a rocking cradle,

And what rough best, its hour come round at last,

Slouches toward Bethlehem to be born?

Joan Didion wrote her famous 1968 essay collection, “Slouching Towards Bethlehem” describing impressions of the Haight-Ashbury district of San Francisco during the 1967 countercultural culture.  Didion did not promote the ‘utopian’ fantasy promoted by LSD, and offered a grim portrayal of hypocrisy and disorder she saw in the hippy world.  Didion felt “the world I had understood no longer existed, and it would become necessary to come to terms with disorder.”  Didion lived another three decades after the summer of love, and kept writing until she died.

Young people like me, during the “summer of love” are now society’s elders.  Whatever liberal concepts we espoused for forty years has changed, whether or not we even believed, “think globally, act locally” values that brought many of us back to the land.  I believed it, and I still believe in love over hate.

The Trump presidency as we understand, isn’t about “love one another.”  He’s our President elect.  Since more than one generation elected Trump, were Americans in my generation faking tolerance, being “politically correct?”

Maybe my younger beliefs were a blip in the time screen, since Trump is my generation, and I obviously don’t know what my generation really believes.  Why vote for more of the same?  One look at the voting map from election day, shows the country wants change, no matter how ugly.

Why not widen our tolerance?

My kids and I aren’t talking about politics because they don’t believe what  believe.  I don’t really know what’s politically true, based on what I see in news sources.

My solution is to practice what I preach.  I promise to try behaving with tolerance on a daily basis. I want to believe in hope for future generations, so I’m passing poetry along to those who read.  It’s what I know is true.

Japanese poet Chora wrote: I fell in love with the wings of birds

The light of spring on them!

One response to “what is coming?”

Previous: Feeling like a poor relation Next: loose cannons