Where does the inside meet the outside? 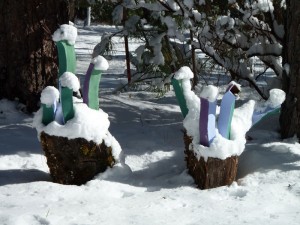 my tubes in snow

My childhood friend’s very short mother stood eye to eye in front of me, a seven-year old, and shook her finger at me, “YOU are so BIG!”   I remember thinking, “big was bad.”  I wondered why I was not seen for who I was.   When I grew to over 5’10” and over two hundred pounds at certain points of my life, men and women have called me ‘a force.’  Something is dreadfully wrong.   I scare people who think they know me, but they don’t know my insides.

I do not think of myself as big, or a force.  I am strong enough to move a roll top desk by myself, shovel a ditch and spread forty five-gallon buckets of pea gravel into a zen garden.  I have always felt like an athlete, not a fast one, but capable of swimming over a mile at a time without struggle.  I rely on my strength to feel accomplished.  I have felt shame and confusion from being judged because of it.

My pinball approach to life, acting and then feeling weird about what I did, is part of my character.  I’m trying to articulate what is going on inside of me.

I push squished squirrels off the road with a stick, bury them, pray for their souls, even though I don’t like squirrels.  My lifetime friend flushed a pregnant fish down the toilet, and I am still horrified by her decision to do that.  We had to talk for a long time about why she did it.  Decades later, I still look at her sideways, what drives her from the inside?

I make efforts to listen to you whine for a little while, because I know you have to whine.  Maybe it helps you figure out another way to get out of your discomfort, so I’ll keep you company for a few minutes while you go on and on.

My most private truth is writing, and I trust writing with my life.  I would have been the ancient kid climbing inside Mammoth Cavern in Idaho, writing on the side of a wall by torchlight, tripping so hard at the mystical, between thought and image.

The line between thought and image drives me to do and make things.  I am off-the-charts private.  Music defines the world, and  I am dead without it.  I make up songs to harmonize with my vacuum cleaner.  I whisper, prayers, mostly.

At church, I once went for a healing prayer, and when the practitioner asked what I wanted, I said, ‘Power.’ “Power is what you do NOT need,” he responded while I kneeled.  Judged for my prayers! I tried to reach out, not control.  So, humbly, I left my family church in that town, after a lifetime of feeling safe there.  I didn’t want to explain to the guy, I wanted prayers.  I prayed for Power greater than me to help me endure great pain.  That person disrespected my privacy, in a sacred space, when I felt vulnerable.  I reached out to pray, and he took that opportunity to ‘teach’ me what he defined as humility, but felt like betrayal.  It’s not been easy to forgive him, and obviously, I’m still dealing with my lack of trust in someone else.

“I am not what I seem,” as Iago said in Shakespeare’s Othello. Iago was a bad guy, but he nailed the human double edge, behaving in ways that people perceive as different intentions.  I realize we can only see what people do.  It’s probably the reason that Greek Civilization recognized drama as the highest form of art, coming through our souls as we watch from a stage, peeking out through eye contact, a soft touch or voices of different spirits.

I see us as fleshy tubes, doing our day.  I have made several tube sculptures in various materials, in different positions, and I’m exploring the idea of ‘being,’ visualizing a dividing line between what is inside and what is outside of the tubes.

I also made a standing eight-foot walk through ‘vulva,’ using fiber and a standing door jamb insert for materials.  A male friend said it scared and overwhelmed him, and he asked me to rename it, call it a ‘portal.’  Walking through my vulva portal takes a person from the outside to another outside, experiencing fundamental differences between who we are inside, and who people think we are, outside.  Today I try not to apologize for myself, whether or not you understand.

2 responses to “Where does the inside meet the outside?”

Previous: I am familiar with suicide Next: Patience came to my house