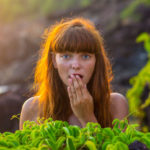 Whoops, I let you see the real me

“There where it is we do not need the wall:

…He is all pine and I am apple orchard.”

I fell in love with Mike in college, and thought he was the most mature and hip person on this planet.  He was a writer, four years older than me, and came out of a major breakup with the love of his life not long before we met.  He wasn’t ready to be in love with me, but I was thrilled when we hung out and had fun times during my freshman year.  He was the first man I ever told about my father’s suicide, sitting in his black Volkswagen Bug on a cold autumn night.

“Do you think your father died on you?”  Shocked, nobody had put my father’s death two years before into such a light.  I don’t remember answering, but do remember thinking, I will never tell you the truth again.

As we sat in the car, Mike explained how he saw our personalities visually, as circles.  He saw himself as a circle with smaller circles reaching to a center.

“The way I see it, people have to penetrate each circle to get to my center, and they can get there.  You’re not like that.”

He saw me as one circle with a rock hard center no one gets inside.

After Mike and I broke up, I didn’t talk about my father’s suicide to anyone.  It was a secret boundary separating me from other people.

Suicide is so profound, it takes years to understand the tunnel of such a choice made by our loved one.  As Frost writes, He is all pine and I am apple orchard.

If my father ‘died on me,’ sharing my honest abandonment in the car with Mike so long ago was hard to confess.  I trusted him to understand what I was talking about, but he’d never experienced suicide, so he couldn’t relate.   The only other tool I had was to create a boundary around my heart.

Those who live through trauma like suicide can recover, but its pain changes and morphs into deeper feelings, too.  We are not to blame for the death, but it’s not like we skip happily down the street, either.  It takes time to reopen our hearts just a little and look at our rock hard center.  Patience and honesty can break down the walls.

Previous: who judges perspectives? Next: taking a chance on letting people know me