taking a chance on letting people know me 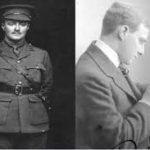 Personal boundaries seem to be rooted in perception.  I see things from my point of view, which seems true and final.  Like everybody else, I’m limited and get caught up thinking I know best about what’s going on.  I tend to forget there are infinite ways to see the world, and nobody knows everything.

I ran into an acquaintance at the post office today, and we haven’t had a chit chat in years. We both love art, and she was considering a new project and wanted to discuss different forms.  I love talking about stuff like that, so we both enjoyed our little visit.  It’s easy to talk about fun things from similar perspectives.

On the other hand, hard conversations make our character.  In my family, my reputation for being the gadfly who brings up unpleasant things ‘stirs the pot,’ and I frequently irritate my relations.  I don’t mean to bring things up, and I am aware how much it annoys people, but trying to fix what I see as injustice is a character aspect.

My grandfather Brown was a Canadian surgeon in France during WWI who performed operations on the battlefield.  An artist painted various officers on barrack walls, and he painted my grandfather playing cards.  Grandpa wore his Canadian uniform and smoked a cigarette in a long holder.  His moustache looked like Adolf Hitler’s.  When the war ended, the barracks were demolished and the portraits were sawed right out of the walls.  My father kept the portrait of his father, and when I was a kid, we hung it over the fireplace.

I was twelve when somebody told me that a neighbor was saying my family had a picture of Hitler hanging over our fireplace.  I went into righteous indignation, how dare they imply we were Nazis.  I marched my eight year-old brother with me down to the neighbor’s house, and I confronted her about the portrait.

“Hi, I’m Pru Brown, and this is my little brother, Brian.  We heard you were telling people we have Hitler hanging over our fireplace, and I wanted you to know it was a painting of my Canadian grandpa.”  The stunned lady invited us into her house and we sat on her couch while she served us water.  Super awkward situation.

I felt it was my duty to face my neighbor.  I didn’t want my brother to feel ashamed of being from our family.  We weren’t related to Hitler.  Maybe it took courage to walk down the street to the lady’s house, maybe I was meddling in gossip.  Maybe I was being hyper-sensitive, but I couldn’t stand thinking my grandfather would be disgraced.  The family honor was at stake, and I had to do something.  Righteous indignation gave me strength, or a sense of power.  I confronted what I considered to be injustice, and tried to fix it.  I might have been ‘right,’ but being right didn’t necessarily make me happy.  The lady must have been mortified, but I did my job.

As an adult, I have experienced the alienating feeling of being ‘right,’ but people didn’t want to hear it.  It is often not worth the effort to do battle.

My brother died decades, so I can’t check how he felt about being dragged with his big sister to the lady’s house for a scolding.  Even then, I knew the difference between the way I handled things and the way other people did.

2 responses to “taking a chance on letting people know me”