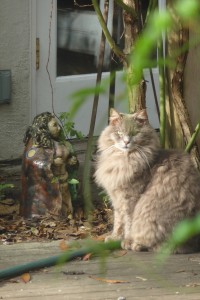 I realize that not everyone is into a cat like I am. Some people don’t like them at all. I am not going to convince someone who has no cat connection to make one, either. Throughout my life, my cats have been my companions and have saved my sanity, no joke. I am writing a tribute to my last grey cat.

Right now, my last grey cat sits on my lap and he has been here for over an hour, occasionally waking up to offer a little purr when I move my leg. He’s got the longest claws I’ve ever known a cat to have, and they catch on whatever clothes I’m wearing, which means many of my clothes have claw ravels in them from his sharp spears. It’s not the claws I love about him, but I do love that he has major claws, for his own protection. He’s used them a few times on my skin and that hurts. I stay away from the claws, if possible.

I love the ways most cats I know get named. They usually have nicknames, or layers of names. My cat is no exception. When he was a kitten, his name started off as B.T., standing for bent tail, but we immediately changed that when we took him home. Although his tail still takes a sharp right angle at the tip, it matters naught to us. His basic name has always been Cookie, because he is so sweet looking. But he is not a sweet little guy at all. He is strong like a Rock, which naturally became his middle name. His final characteristic is the lionlike strength of his presence, like “I am HERE.” So we went for the Spanish word, ‘Son,’ plural of Soy, To be, and for us it means, “so they are.” We interpret it this way because he is as Bad Ass as two cats, which he truly is. Therefore, I have a Bad Ass cat named Cookie Rockerson.

I’ve seen Cookie sit still like Buddha for long periods of time in the yard on a sunny day, looking out into space. He likes rolling on both sides in the exact spot of dirt in front of the window whenever we come home. He has given himself mats from this rolling move. His rolling usually tells us it’s our cue to pet him, but only some people can pet him. Not everyone can pet Cookie, because he is such a Bad Ass. I am a lucky someone, however. Other people can get scratched pretty quickly and with great depth from Cookie’s swordlike claws. It doesn’t take him long to swipe you to the point of bleeding and that’s too bad for you. Like he cares? I don’t think so. Which is what makes him a Bad Ass cat, right? Son of Lion, very much a boss of the yard. He demands your respect. Has he earned it? Maybe not. What does he have to do? If he must hunt, he will do that. But if he must be nice, that may not happen today.

This early morning Cookie waited for me to rise, and if it’s not early enough for him, he will cry to let me know he wants breakfast a.s.a.p., and don’t you fool around. It is not funny, he wants his handful of kibble right now and don’t waste any time getting it in the dish. Be quick about it. After he eats some of that, he may be more relaxed. Maybe he’ll hang out on the dirt waiting for a little pet from me, maybe not. Much depends on the weather.

If it’s raining, Cookie is not going to get wet, and will make sure you know how much he does not like getting wet. The closest time to whining I’ve ever seen with Cookie is because he not happy being wet.

My husband doesn’t like to touch Cookie, because he doesn’t really like cats, and thinks he needs a bath, which he undoubtedly does, but I’m telling you right now that this cat will not be bathed. He’s into being brushed, and I’m the main one to do it for him, but bathing this cat would be the wrong way to go. He gets the flea medicine and doesn’t have fleas, so what’s the problem? He’s outside ninety percent of his life, unless he’s sitting on my lap or sleeping under a bush during the day. What does he care if he’s been shampooed? It means nothing to him. So I leave him alone.

This is an outdoor cat with his own little house where he can sleep whenever he wants to sleep there. Cookie bothers no one, enjoys the simple things, like staring and eating kibble. Whether or not he’s smart doesn’t matter, because we communicate and he knows how to get what he needs when he wants it.

He just moved off my lap because I pulled a foxtail out of his fur and he didn’t like that. But if I don’t remove it, who will? It’s not like he’s got other servants to tend his needs. I will be his loyal groomer. That will be my legacy to him.

Previous: Fathers Next: Listening is the main thing