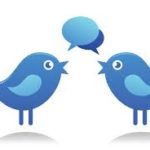 Someone said, “You come into this world alone, and you go out alone. The rest is chit-chat.”  They’ve got a point. Chit chat defines small talk, chatter, gossip and prattle. Maybe it even defines deep thoughtful learning and life changing conversation.  Chit chat seems to have a semantic tone of ‘prattle’ or insignificance, but does it really have to be there?  If I am alone in life, which is true, any interaction that I deem valuable comes from my perception.  It could the first conversation, or maybe the last, but the impact expands or diminishes based on how I assess its value.

My senior high school class voted me ‘easiest to talk to’ and I valued that award.  I’m into talking, chit chat, or call it whatever.  It’s a big part of writing these blogs.   I know the moment chit chat occurs that matters most.  It’s not the talking, but it’s the being together.

But not always.  Once I hurt my dear friend’s feelings by saying, “Sometimes I just tune you out.”  It was true, I didn’t listen to her, but why say it and make it so obvious?  I wasn’t diplomatic with my words, and should have said nothing. I did apologize, but truth put a wedge between us for awhile.  I know I’ve been tuned out by other people who didn’t say so, but I felt dismissed.  It’s rude, plain and simple.

Sometimes I don’t want to hear anybody else, because my thoughts run rampantly in my head and I barely have room for another observation, especially if I’m working something out.  Other people do what they do, too, and we are all humans.

Is chit chat a dismissive type of conversation, or is seeing interaction as a realistic observation?  Social gatherings usually contain heaps of chit chat.  Does that make them less valuable than some deep philosophical insight between God and man?

When my dogs want attention, they come up and demand it from me.  They put up their paws on the side of my chair and say, Pet Me.  A trainer told me to ignore the dog because they are calling the shots at that moment.  She believed a master should be the master all the time, therefore in charge of all interactions.  My dogs just wants me to pet them.  Isn’t that their form of chit chat?

“I just called to say I love you.” Stevie Wonder’s fabulous song is sort of a definition of chit chat.  Maybe we can be grateful somebody wants to chit chat, or call to say they love us, and they do not run away or find something else to do.

We are humans being.  Being.  Not been.  When chit chat ends, we end.  I’m glad for distractions to keep me from constantly thinking about ‘big’ picture relevancies.  I get preoccupied with my own thoughts to a point where I forget about chit chat. Internal thinking doesn’t need language, but can take us away from the present moment.

When I make things, I am in that zone of being.  It’s so pleasant to work beside another artist, or listen to a story or music while I work.  I love passing time making something and chit chatting in any form. It seems like the best of both worlds.

Previous: Behaving like an adult Next: more than teeth