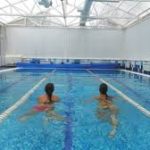 My friend retired years ago and we see each other at the athletic club.  He runs in the pool while I swim laps. We  talk about things from time to time as we do our workouts.

Somehow got on the topic of why September is a rough month for me.  My father committed suicide in late September, and I told my friend how much I hate the anniversary.  He confided that his father also committed suicide, along with five other family members.

I couldn’t believe it. I mentioned three generations of my family killed themselves, and he told me about generations of his family members.  It seemed like we both tried to get the information out of us, despite the shame of decades of hiding such devastation.  While he told me, I noted that he delivered the truth with the same detachment I do when I tell people.  He’d been processing those deaths for a long, long time, like me.

My friend told me that he’s not considered suicide, and I told him I had indeed considered it at one point during my youth.   He didn’t feel survivor’s guilt, and I didn’t experience that, either.  My friend told me that anti-depressants are effective.  Antidepressants haven’t been my solution, but we both agree that healing the loss and experiencing depression was painful.  Both of us got through the gauntlet intact.

There was magic when we talked with each other about our experiences with suicide.  I have never experienced such intimacy about the subject, and felt a rush of appreciation for him, grateful that I wasn’t as isolated anymore.  He understood what it means to face grief, which he’s faced many more times than me.  I felt as if I climbed out of a private tunnel where people didn’t understand me, and met someone who understood that it wasn’t my fault or his fault.

It really matters to talk with each other about suicide and consequences for the living.

I devote many blogs to telling the truth about families living with dysfunction, and how finding solutions to healing is a lifesaver. My friend confirmed that secrecy is not the answer to such a complicated psychological decision.

Suicidal grief is different because it is coupled with disappointment that our loved ones decided their lives weren’t worth living, and society does not respect their decision to check out.  Survivors are expected to move on and ‘get over it.’  We wish with all of our hearts that our loved one hadn’t chosen death, but also shift course in our own lives because suicide is such a game changer that nothing remains the same.

We all know we aren’t supposed to kill ourselves, but it happens.  Both living and dead are caught in the crossfire of addictions or deep depression.

Our unforgettable conversation reminds that we never know about what people endure.  Once we start getting honest and talking to each other, things do get better.  No shame needed.

2 responses to “more than teeth”

Previous: chit chat Next: elegy of a blackberry