elegy of a blackberry 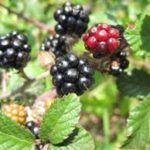 a red blackberry is green

West Point is a small hamlet in the central Sierra mountain range.  Scout Kit Carson was said to have named the place because it’s the most western portion of two forks of the Mokelumne river, the watershed for Contra Costa County in the east bay area.

Indigenous people live here.  There is a grinding rock near our creek, as evidence of the Miwuk tribe claiming their place because they have been here for thousands of years.  We are new neighbors of almost fifteen years, and our neighbors are a remaining aspect of the Miwuk tribe.  We are the sixth owner of our property on record.  Valley oaks and several types of pines, cedars and madrones, manzanita grow everywhere on our land.

Three miles away was the eastern part of Butte Fire in 2015, and we could see the fire from Main Street.  We were evacuated for a week.  If the wind hadn’t blown in a different direction that day, our world would have burnt to the ground.  It was a devastating fire and over five hundred homes went up in flames.  People lost everything.

Gold miners, loggers, cannabis growers, trimigrants and retired people on pensions come to this north eastern part of Calaveras county, which is an area of one thousand square miles.  Young people move away from home to find jobs and make a living somewhere else because jobs are so scarce.  Boom and bust feels like the rhythm of our hills.

This land has seen it all.  Huge dredging, troughs and disruptions happened on our property a hundred and fifty years ago, because people hunted for gold and were not gentle about it.  They moved the earth around, bigtime.  Our nameless creek doesn’t have natural landscape of sloping hills.  Creek slopes look cut and disturbed.  It’s tried to mend itself from digging and shifting of boulders.

Cannabis neighbors currently live on the down side of our creek, which heads toward Mokelumne’s middle fork.  We don’t know our neighbors, who installed a small pipe from the creek to water plants in the springtime.

I bushwacked deer trails with my dogs today, and noticed two types of blackberry bushes growing around summer’s dried up creek.  We have native California blackberries, which have a tiny maple shaped dark brown leaf on a red bramble and their tiny berries aren’t ripe yet.  We have more of the non-native rambling diabolical green leaf thorny runners most Californians cope with in their yards, and those blackberry thickets far outnumber native blackberries.  They send shoots twenty feet long, to start in another area.  We’re not getting rid of the interloping blackberry, that’s for sure.  It takes over everything if we don’t cut it back.

So I picked a ripe blackberry and it reminds me of my childhood.  Most Californians who grew up with blackberries would agree what someone said:  a red blackberry is green.  A hot ripe dark blackberry is heavenly, regardless if it’s native or not.  I thought non-native ones were the native ones, but have learned the truth.

All the new thinking is about loss.

In this it resembles all the old thinking.

The idea, for example, that each particular erases

the luminous clarity of a general idea…

Or the other notion that,

because there is in this world no one thing

to which the bramble of blackberry corresponds,

a word is elegy to what it signifies.