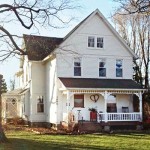 my mother grew up in a house like this

Our house had no mirrors, except for the medicine cabinet in our tiny bathroom.   I sat in the sink after my baths with my hair twisted up in a towel, staring into my tiny reflection, grooving on how glamorous I was in a turban.   Steam fogged the mirror, as I watched my face appear and disappear.   I draped the towel over me like a nun’s habit, and played a martyr, misunderstood and victimized, like Hans Christian Anderson’s Little Match Girl.   I leaned in, asking the question that strangers asked me.  ”Where did you get those big brown eyes?”  My mother taught me to reply,  ”They came with my face.”  I practiced that response, staring into my hazel eyes, holding pretend matchsticks in the snow.

The only full-length mirror we had was looking out the plate glass living room windows into the dark backyard.  There is a reason.  My mom was five years old when she set herself on fire sitting on the edge of the bathtub, behind a closed bathroom door on the second floor of a Virginia farmhouse as she faced her 7-year-old sister.  She lit a match to a self-rolled toilet paper cigarette loosely filled with pipe tobacco.  Flecks dropped onto her dress, burst into flames while her sister watched and screamed.  My Grandfather heard my mother shrieking, and bolted up a flight of stairs to break down the bathroom door, pick up his burning daughter and smother her flaming skin inside the hallway’s Persian rug.

For eighteen years, my grandfather took my mother by train up to New York’s Presbyterian hospital to his college fraternity brother, ‘Uncle Dan,’ who had become distinguished as a gifted plastic surgeon.  Miraculously, Dr.Webster transformed little Phoebe’s third degree burns by growing new skin sausages for future skin grafts, and most people didn’t even notice her scars.  My mother thought she was the ugliest girl in the world.  Who would ever want mirrors.

I didn’t know why my adult mother carried her photograph taken by Uncle Dan as a child burn victim in her wallet, inside her black leather purse.  I was nine years old when I found the black and white photograph, as I was ripping off her change.  I picked up her wallet, wrapped with rubber banded notes of errands my mom needed to do.  I saw the bent edges of a photograph peeking outside the middle of it.

In the photograph, my mother looked out into space, with bleary eyes far beyond her five years, like a resigned war victim. The camera showed her chin melted to her chest, mouth gaping open like a hideous monster.

I froze and stopped breathing.  Everything got small.  Unspeakable, my worst nightmares could not have conjured the disfiguring severity of what my mother did to herself before I was born.  I couldn’t stop staring, but wanted so much to look away.

So I didn’t tell her what I saw in her wallet.  Photographic truth proved that my mother was different than other mothers.

One response to “Early times”

Previous: would you want to read this? Next: blessed life