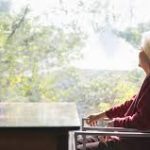 I’m feeling something because it’s a happy new year 2018 and I visited my childhood friend, Lindy who was transferred to a Sunnyvale, California senior facility four months ago.   She’s been a ward of California for over fifty years, diagnosed as a paranoid schizophrenic.I casually walked into a Senior Center and nobody acts like they have schizophrenia.  The workers are doing their jobs, and said hi to me in a friendly way.  One aid walked me to Lindy’s room because she was on her way to give her medication for a serious lung condition developed from fifty years of smoking.  She told me Lindy’s stopped smoking. which I find very hard to believe.  Maybe they aren’t letting her smoke anymore.  She loves to smoke.

On the right side of the room, Lindy’s roommate, a pretty sharp gal, lies messed up in a bed because she’s lost both legs from amputation. The hospital room has a television attached on an arm for each patient’s bed. Lindy and her roommate have their own televisions, and both blaring two feet in front of their faces.  Her green eyes are still beautiful, and she still doesn’t wear glasses.

Lindy was immaculately outfitted in black with a white sweater.  She matched up everything, including cute black flats with no socks.  Her hair is silver grey, cut in a new darling short brushed back style, so her widow’s peak is prominent.   She had pretty big red lips, kind of smeary, and a bit over the top with how much she put on.  Lindy still has no teeth, which is the same as the last time I saw her.  She wears long manicured metallic blue acrylic nails with a silver stone ring on her finger.

Even though she wasn’t excited to see me, Lindy lit up a little bit, because I brought presents.  Lindy sat in a wheelchair and I sat beside her on her bed and patted her hand, told her I was happy to see her.  She got right to opening.

Lindy didn’t like the matching purple starry pajamas, but did like the coral sweater and the turquoise sweatshirt and grey stretch pants. The best part were the peppermints in the little tin. She didn’t talk much. I asked her how long she’d been at this place and the roommate put up 4 fingers, indicating four months.  The roommate spoke for Lindy, who seemed more monosyllabic than last time I saw her in July.  She was really into her TV.

She looked straight into my face and asked, “Where is my family?”  I reminded her that two of her six sisters were dead, and the other four lived far away, so I visit and she’d have some company.  I tried to chit-chat a little bit, but nothing was going on between us.  I reminded her I’d visited her in other locations. This one seemed pretty nice, with a great window view.

I offered to push her around the facility in her wheelchair and perhaps go outside to get some fresh air, but she wasn’t into that, either. She asked me if I brought her any cigarettes, and seemed very disappointed that I hadn’t.  The whole visit lasted about fifteen minutes.

I asked her if I could come back, and she said, “yeah.”  I patted her hand, but she doesn’t really care if I do or not.

It’s one of these things where I need to see her because she was my friend and I’ve known her since we were little girls. Watching her age is like watching me age.  I would never want her to be forgotten, even though it’s a one-way deal, it eases my sense of absence.